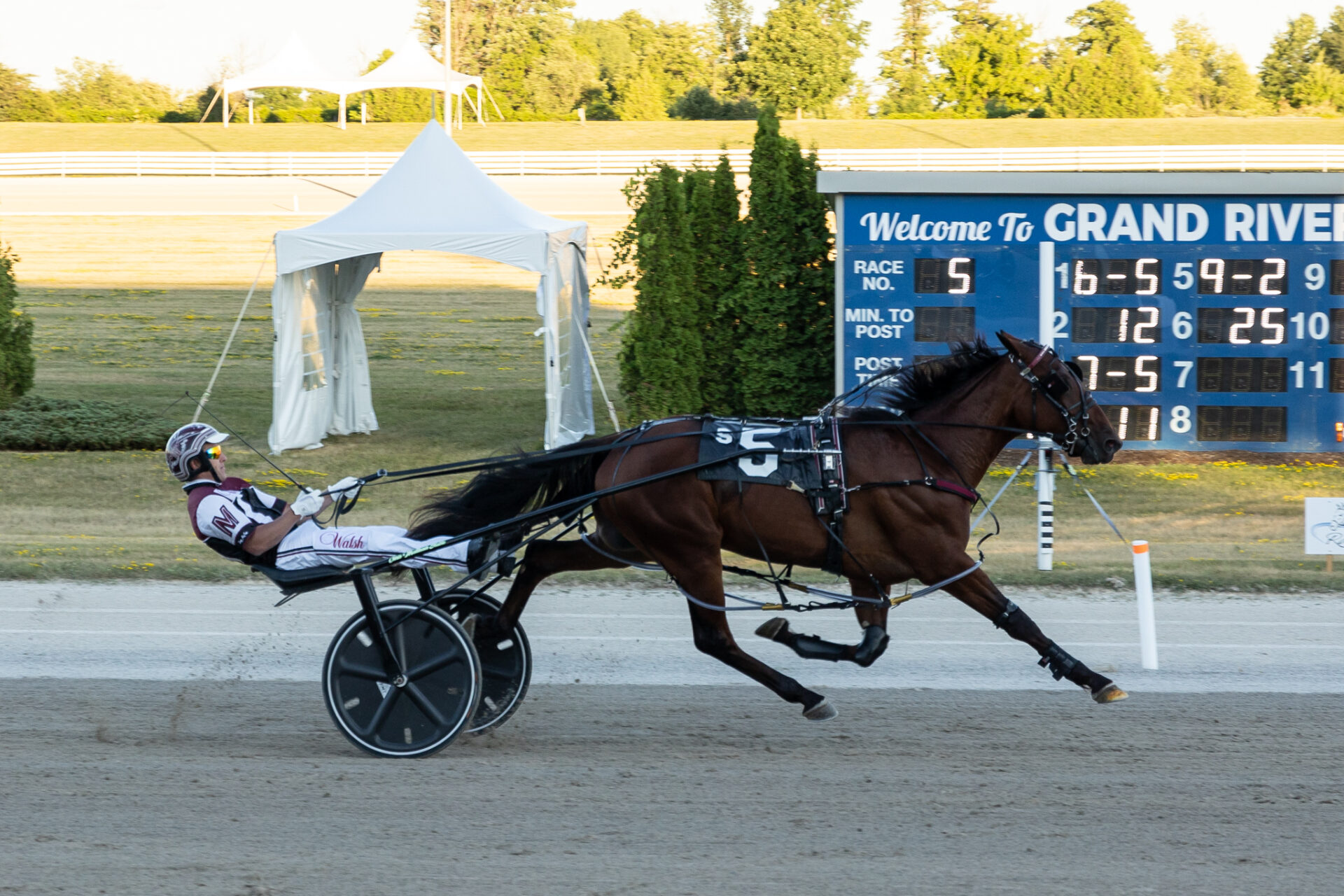 Grand River Raceway juggernauts Doug and Gregg McNair will try to continue their domination of the Battle of Waterloo following a sweep of the two $15,000 eliminations contested Monday night (July 25).

First, the McNairs scored with Sounds Good, who also looked good in romping to an open-length score in 1:56.3.

Doug launched the Bettors Delight gelding for the lead to a :27.2 first quarter and steadied the tempo as Big Dream Fella rushed out of fifth to blitz the pacesetter coming first over through a :56.2 half. Sounds Good kept the favourite parked up the backside and clicked by three-quarters in 1:26.2 before slipping clear of the field coming for home. In a matter of strides, the Gregg McNair trainee scooted to a 6-1/2-length victory over Santana Hanover, who overtook tiring pocket-sitter Wall Street Bell for second. Coop A Loop recovered from a break at the start to finish fourth while Big Dream Fella faded to fifth.

Michael and Sam Sergi own Sounds Good, who won his first race from three starts and has now accrued $19,656 in earnings. He paid $11.30 to win.

The McNairs put forth another front-stepping effort with The Moment Arose to win the other Battle of Waterloo eliminations in 1:56.3.

Starting from the pylon post, Doug protected position with the Control The Moment colt and held firm on the lead while pressed by Lyons Brushmarks to a :27.4 first quarter. With nowhere to settle on the pylons, Lyons Brushmarks raced parked alongside The Moment Arose to a :58.3 half but folded from the wide trip entering the backstretch. Better Bea Terror swung three wide to take his aim at The Moment Arose to three-quarters in 1:27.4 until The Moment Arose accelerated in the final quarter and won going away by 2-1/4 lengths. Moment Is Here chased from the pocket for second while Better Bea Terror held third and Parsons finished fourth.

Winning his second race from three starts, The Moment Arose has now earned $31,156 for owners John Stamatis, Joseph Orofiamma and James Georgakopoulos. He paid $4.60 to win.

Gregg and Doug McNair have won four of the last 14 renewals of the Battle of Waterloo. Doug is tied for most driving wins in the race with Jody Jamieson at four while Gregg sits second in training wins to Carl Jamieson, who won the race six times. The McNair pair earned a protected draw between posts 1 and 5 with their elimination victories, and the final draw for the $204,000 Battle of Waterloo – presented by Winbak Farms – appears below:

The debutante complement to the Battle of Waterloo, the Battle of the Belles, featured three eliminations on the Monday card. The sharp team of Doug and Gregg McNair opened festivities on the evening with a narrow pocket-popping win by the Sportswriter filly Shake It Twice in the first elimination.

Lyons Bettorday, with the post advantage starting from the pylons, pushed for the front while Shake It Twice left but obliged to settle in the pocket moving to a :28.4 first quarter. McNair kept a firm grip on his charge as Lyons Bettorday snagged a breather to a :59.1. Lyons Bettorday slightly opened her lead to three-quarters in 1:28.2, though Shake It Twice then lifted from second. She spun for home and attacked Lyons Bettorday through the lane to match strides and then stick a nose in front at the beam to win in a 1:56.3 mile. Wifey Said So finished third, beaten another four lengths, with Ashlees Sweetie fourth.

Gregg McNair conditions Shake It Twice for owners John Fleischman and Georges Groulx Jr. She has now won two races from three starts, banked $19,060 and returned $3.80 to win as the co-favourite.

Blue Glamber got the jump on the field around the final turn, but Brynley Seelster finished the job to win the second Battle of the Belles elimination.

Miss Canada motored to the lead and pocketed 9-5 favourite Brynley Seelster to a :27.3 first quarter. She slowed the pace toward a :57.3 half, where Blue Glamber then launched from fourth and marched towards the pacesetter entering the backside. Blue Glamber overtook Miss Canada passing three-quarters in 1:26.2, but driver Jody Jamieson had room to pull Brynley Seelster from the pocket. Coming off the bottom corner, Blue Glamber regained a slight advantage on Brynley Seelster to her outside, though the Jack Darling trainee carried her momentum and overpower Blue Glamber in the final strides to win by three-quarter lengths in 1:56.1. Western Flames gave chase in third and Best Show finished fourth.

Jack Darling owns Brynley Seelster, a Big Jim filly, through his Jack Darling Stables Ltd. She broke her maiden at fourth asking with the win and padded her earnings to $11,345. She paid $5.80 to win.

Big Big Plans barreled to the lead and repelled all challengers in the final Battle of the Belles elimination to win in 1:56.3.

Driver Trevor Henry secured the top with the All Bets Off filly just before a :28.1 first quarter with Glenboro yielding to race from the pocket. Ima Doll soon pulled first over passing a :58 half and loomed toward Big Big Plans up the backside. Big Big Plans remained well in hand while Ima Doll recovered from a bad step to three-quarters in 1:27 to stay at the pacesetter’s wheel coming for home. Though Henry called upon Big Big Plans and the Bob McIntosh pupil rebuffed all charges to win by 1-1/4 lengths over Glenboro, who darted through the open stretch for second. Ima Doll settled for third and Birdie Three gave pursuit in fourth.

Bob McIntosh co-owns Big Big Plans through his Bob McIntosh Stables Inc. with Mardon Stables and Dave Boyle. She pushed her bankroll to $109,120 in winning her third race from four starts and paid $2.40 to win.

The top three finishers from each elimination advanced to the $155,000 Battle of the Belles final, with each elimination winner earning a guaranteed draw between posts 1 and 5. The field as they will align appears below:

Both the finals for the Battle of Waterloo and the Battle of the Belles will be the featured events on the Monday, Aug. 1 race card at Grand River as the Elora oval will host the 32nd edition of Industry Day with a card that will also feature Ontario Sires Stakes for three-year-old pacing fillies. First-race post time for the Industry Day card is 12:30 p.m. (EDT).

Racing otherwise returns to Grand River on Wednesday (July 27) with a 10:-race card that starts at 6:30 p.m.

Check out all the details for Industry Day by clicking HERE.