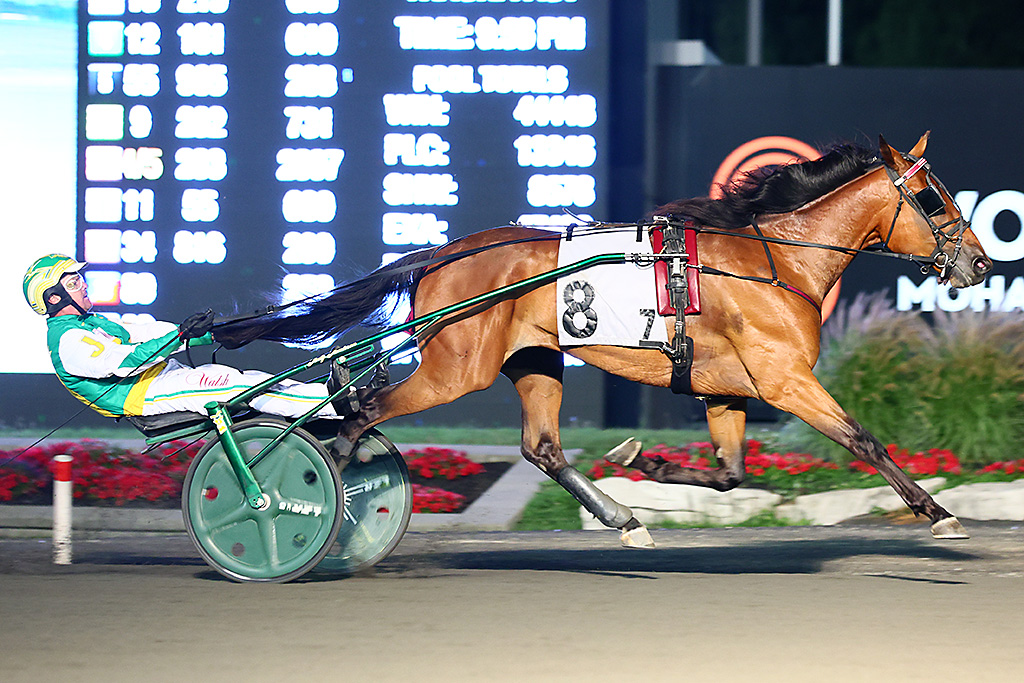 Eleven sophomore trotters competed for $199,900 in the fourth Ontario Sires Stakes Gold leg tonight at Woodbine Mohawk Park, and Unevergonnagethis came away with the upset win, establishing a new lifetime mark of 1:53.3 in the process.

Star Power Hanover showed early speed from post 9, with Scott Young sending him straight to the front and setting a blistering opening panel of 26.1.

Unevergonnagethis was one position to the inside of the early leader leaving the gate and sat two-wide in fourth entering the first turn.

Jody Jamieson made the decision to send his charge to the lead, and the Jeff Gillis trainee was game, moving to the front and settling into the pylons in time to lead the field at the half-mile in 56.1.

“I was pretty concerned when 26.1 flashed up,” said Gillis. “That’s a lot more than he’s ever been over the quarter before, but he answered the bell. I was proud of his effort.”

Unevergonnagethis led the rest of the way. Armstead Cole tried a first up move, and race favourite Twin B Archie found racing room in the lane but finished two lengths back in second. It was the first OSS score and fourth victory this season for the Muscle Mass gelding who paid $24.90 for the win.

Gillis, a resident of Fergus, Ont., purchased Unevergonnagethis off OnGait in March.

After qualifying in June, Unevergonnagethis reeled off three straight wins in the conditioned ranks at Mohawk. Proving Gillis’ instinct correct that while he was winless at two, he showed potential from his four starts, and one in particular.

“He made a break, spotted about 20 lengths, and was charted in 2 minutes or something,” said Gillis. “The ability was clear. Just a matter of time, and maturity, and we’re fortunate to get him.”

The winner’s share of the purse was $99,950 moving Gillis’ charge to $151,756 in career earnings. The biggest score of his life earned Unevergonnagethis at least one week off.

“There’s a little gap to the last Gold, it’s October 4th, so we’ll probably try and freshen him a bit and have him on the top of his game for then,” said Gillis.

Unevergonnagethis is the fourth different three-year-old trotter to win at the Gold level this season, setting up an exciting finish as the October 15 Super Final approaches.

Safe Conduct, a Charalambos Christoforou homebred, was third with Chris Christoforou in the race bike. The Archangel son is trained by Camilla Christoforou and co-owned by Irvann Holdings Inc (Toronto, Ont.).

Image: Unevergonnagethis earns his first OSS win and the lion’s share of the $199,900 purse on August 25 at Woodbine Mohawk Park. (New Image Media)