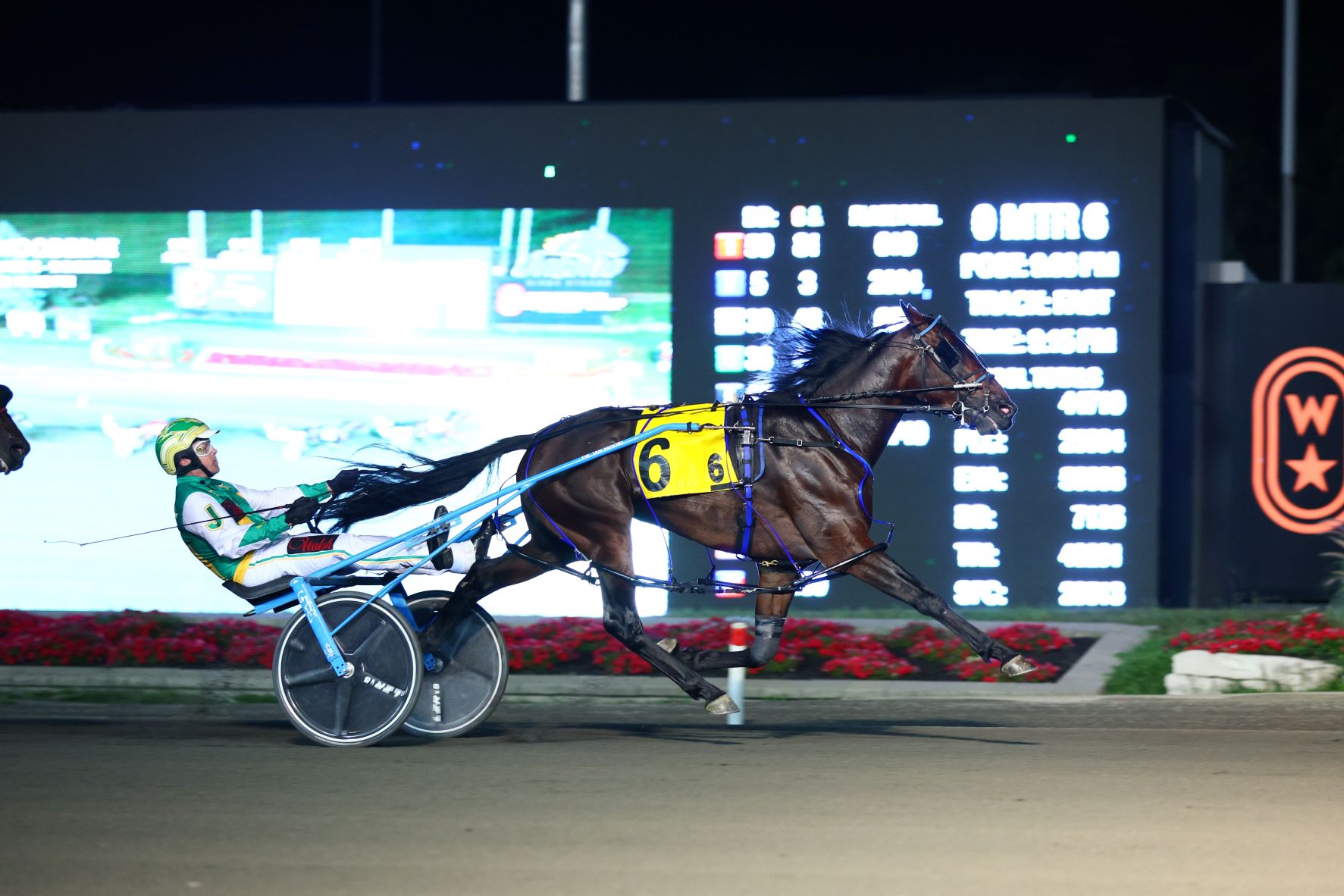 Stockade Seelster left well from the outside post in the six-horse field, and Jody Jamieson piloted him to the front through an opening panel of 27.2.

He cut fractions of 55.4 and 1:23.1 before Jamieson pulled the plugs in the stretch to fend off a challenge from pocket sitter Ace of Aces. The Dr. Ian Moore trainee blasted home to cross the wire in 1:49.3.

“You see he’s been great all along, and tonight Doc had him extra great,” said Jamieson. “He was full of himself the whole way. Through the half a little faster than I wanted to go, and third quarter I let him pace a little bit, and he had more in the stretch so he’s just an amazing animal.”

Dr. Moore also trained State Treasurer, and Stockade Seelster’s attitude through the early part of his career is reminiscent of his double millionaire father’s.

“He’s so much like his dad it’s unreal,” said Dr. Moore. “He’s got very aggressive after a couple of starts just like his father did, and I actually jogged him yesterday with a pull strap on him that his father wore, just to try and settle him down a little bit.”

Through six starts Stockade Seelster has earned $287,800, and he’ll have the chance to add to that later this month in the $825,000 Metro Pace at Woodbine Mohawk Park.

“There’s always some late one that shows up, as it did last year with Monte Miki,” said Dr. Moore. “But we’ll await our chance, and hopefully he’ll stay fresh and be ready to roll.”

Sally Macdonald (Souris, PEI), and her nephew Paul Macdonald (Toronto, ON) own Stockade Seelster, who paid $2.10 for the win.

Ace of Aces finished second for the third straight outing. James MacDonald was driving the Bettors Delight colt for trainer Shawn Steacy. He is owned by Katherine Steacy (Lansdowne, ON), A K Malik Stable (Ottawa, ON), and Landmark 15 Racing Stable (Lansdowne, ON).

Trevor Henry piloted Moment Is Here through the final quarter in 26.3 to nab the final podium spot. The All Bets Off gelding is trained by Robert McIntosh. McIntosh owns with and Al McIntosh Holdings Inc (Leamington, ON), Frank D Baldachino (Harvey Cedars, NJ), and Mardon Stables (Loretto, ON).

Earlier in the evening Team McNair was victorious in the first OSS division in race 2. Whatchulookin At stepped up to the Gold level and won after a Grassroots score earlier this season.

The Hes Watching colt left well from post five and was settled into pocket position behind 4-5 favourite Write Me A Rose. Doug McNair popped out along the backstretch and appeared to be trying a first up move, before Sylvain Filion hit the gas pedal on Write Me A Rose and McNair slid his charge back along the pylons.

“Sylvain looked like he was just kind of grabbing up, and I thought maybe for a second he was waiting for me, and he obviously wasn’t,” said McNair. “The rest of the trip worked out. He was a good colt to follow.”

McNair was content in the pocket as Write Me A Rose led the field through the half and three-quarters in 55.3 and 1:24.3. Whatchulookin At was able to find racing room as they were five wide in the lane and paced the final panel in 27.3 for the win.

“We weren’t going a whole lot of speed around the last turn into the three-quarter pole,” said McNair. “So, I was just praying for room, and we just barely got room. That’s racing you just get lucky sometimes, it wasn’t because of the drive.”

His final time of 1:52.2 was the fastest Watchulookin At has stopped the timer in a win to dat. It was his third win this season for co-owners Gregg McNair (Guelph, ON), Jim Newton, Saskatoon (SK) Bloomingwood Farms Ltd (Harriston, ON), and Paul L Kidd (Guelph, ON).

With the win the colt jumps into the top-10 of the Gold standings and will have a chance to secure his position in the $225,000 Super Final in the fifth and final Gold leg on October 5th, at Woodbine Mohawk Park.

Santana Hanover continued his strong freshman campaign with his third place finished. Owned by Domenic Chiaravalle (Hamilton, ON), the Scott McEney trainee now has five on the board finishes in six starts this season.

All Results from September 3 at Woodbine Mohawk Park