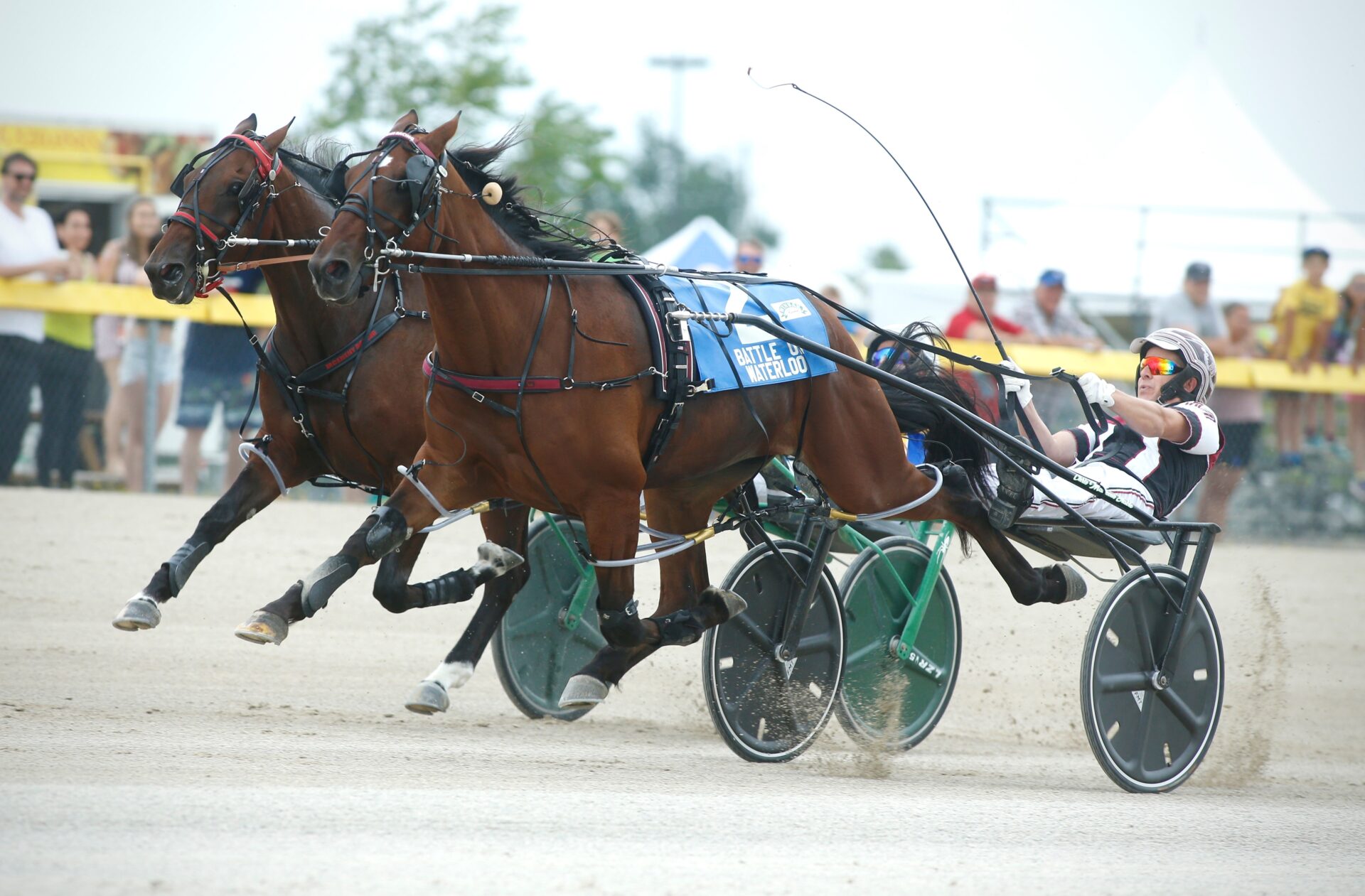 ELORA, Ont. (Aug. 1, 2022) — Team McNair added to their Grand River Raceway resume on Monday afternoon (Aug. 1) when their Bettors Delight gelding Sounds Good responded to all pressure to score a 1:55.1 victory in the $204,000 Battle of Waterloo Final presented by Winbak Farm.

Off the 8-5 favourite, Sounds Good grabbed the lead while Santana Hanover parked to his outside passing a :27.2 first quarter. Santana Hanover stayed at the throat of the pacesetter while the tempo slowed by a :57.2 half and accelerated in tandem in the drive up the backside to three-quarters in 1:27.2. Sounds Good’s stablemate The Moment Arose tipped three wide coming to the final turn, but heading for home the field separated into two.

Santana Hanover, a 49-1 shot, kept digging into Sounds Good straightening for home as the pair scooted clear of the competition. Yet once driver Doug McNair pulled the plugs on Sounds Good, the Gregg McNair trainee responded and edged away from Santana Hanover to hit the finish a length better. Bettor Bea Terror finished third and Moment Is Here checked in fourth.

“There was a bit of a panic mode around the first turn,” driver Doug McNair said after the race. “I just didn’t know where everybody was going to be situated. I wanted to do the give and go with Austin [Sorrie], but I noticed there was a horse on his back. Kudos to him for costriding and finishing second. In a race like that, its tough to sit along out there nice and patiently.

“It’s good to team up with Doug,” trainer and father Gregg McNair said after the race. “It’s a great race to win; it’s a hard race to win. That colt all winter, he didn’t really like to cut the miles. So I was a little concerned over that, but he was like that last week and raced good.”

For Doug and Gregg, this is their fifth victory in the Battle of Waterloo, which makes Doug the winningest driver in the race and brings Gregg one win closer to Carl Jamieson’s record six victories in the “Battle”.

Sounds Good earned his second victory from four outings and added to his account now worth $121,656. Michael and Sam Sergi own the gelding who paid $5.20 to win.

Glenboro got a jump on the competition as Big Big Plans raced mired in traffic. But once daylight opened, Big Big Plans accelerated and spun for home to collar the 25-1 shot in the final strides of the $155,000 Battle of the Belles.

Driver Trevor Henry barreled Big Big Plans from post 5 to the pylons entering the first turn with Brynley Seelster securing the pocket. Shake It Twice, outsprinted from the pylon post to the first turn, landed third but quickly popped off the pegs and to the lead by a :27.2 first quarter.

Once on the lead, Shake It Twice slowed the tempo, which bunched the field passing a :56.3 half and prompted Blue Glamber to commit to a first-over push. Her stablemate Glenboro tracked that move but flipped three wide under a fierce drive to overpower Shake It Twice through three-quarters in 1:27.1. The pacesetter folded from the pressure off the final turn and Glenboro turned for home on the engine, though Big Big Plans came revving to her outside within a matter of strides and put away Glenboro coming to the finish of a 1:56.4 mile to win by a half length. Brynley Seelster finished third and Shake It Twice held fourth.

“They kind of had me pinned down in there,” Henry said after the race, “and I had to wait until I had a little room. Once I got room, I was just hoping I had enough time to make it up. But she raced awesome. The only thing that saved me [was] I didn’t use mine hard; I had to use her just a bit to leave. She is better off a helmet, but you just never know what’s going to happen [on a half-mile track]. It all just worked out in the end.”

Big Big Plans now has four wins in a row from five outings and has now accrued $186,620 for owners Robert McIntosh Stables Inc., Mardon Stables and Dave Boyle. Bob McIntosh trains the daughter of All Bets Off who returned $4.30 to win.