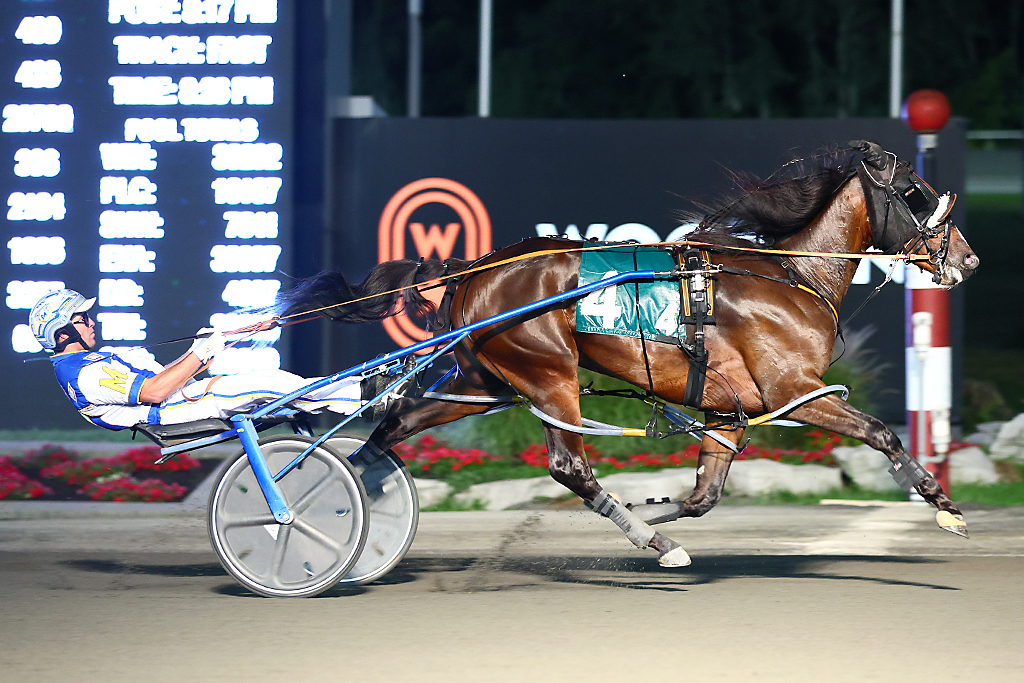 It’s been a busy week for trainer Nick Gallucci. He swept the Ontario Sires Stakes Gold divisions on Sunday at Rideau Carleton Raceway, and tonight at Woodbine Mohawk Park won one of two OSS Gold divisions for freshman pacing fillies.

In between those wins, he became a dad for the first time.

“It’s a lot to take in obviously,” said Gallucci. “It was really special, and something we have been looking forward to for a really long time. It really opens your eyes to the big scheme of things, and I am lucky to have a really good crew at home, and they look after the day to day, and I am very grateful for them.”

His partner Karoline is manning the ship at home, while Gallucci adjusts to his new routine.

“Karoline has been my backbone for the last five years in the stable, so we’re missing having her,” said Gallucci. “But luckily other people have stepped up to the plate and we are still getting everything we need to done, so just very lucky.”

While Gallucci settles into life as a new father off the racetrack, he came into tonight hoping Savethelastdance would settle down on the racetrack.

The Bettors Delight filly struggled last week in the Eternal Camnation, fighting driver James MacDonald in a troubled trip, and spent the entire mile outside. A week prior she went off-stride in a Gold division at Grand River Raceway, but still managed to win after leaving the gate with blazing speed.

Tonight, she was better behaved. MacDonald positioned her on the pylons entering the first turn, well back from the early first quarter pace of 26.1 set by Freshen Up.

“Nick did a great job with her, and he’s getting her more calm every time she races,” said MacDonald. “And that’s making my job easier. She’s got all the tools; we just want to make sure she’s doing it the right way. You don’t want to learn any bad habits early.”

The pace continued to be brisk with the field pacing the half in 54.4. Savethelastdance made her move off cover from fourth position as the field passed three-quarters in 1:24.4.

Popping out four wide entering the lane she kicked home in 27.1 to win in 1:51.4 by two lengths over Illusion Seelster, who edged out Big Big Plans in a photo for second.

“It’s more rage than burst. She’s just so quick footed,” said MacDonald. “Unfortunately, last week I was out the whole way, and I was really wrestling with her, so she didn’t have that big kick. But tonight, she really finished well, and I think it’s going to get better and better the more calm she gets.

Silver Label was victorious at the Grand Circuit level in her freshman season, winning the Champlain Stakes. Savethelastdance will forego next week’s Champlain but will have a chance to earn Grand Circuit glory when she targets the $500,000 Shes A Great Lady eliminations on September 17.

“She has all the tools,” said Gallucci. “It’s just a matter of getting her in the right spot and getting her head on straight. I think she can give any filly in North America a run if she’s on her game.”

Savethelastdance paid $2.40 for the win.

Illusion Seelster earned her biggest score to date, with the second-place result for trainer Gabriella Sasso. The State Treasurer filly is owned by Martwest Racing Stable, and Jeffrey Courchesne.

Rounding out the podium was Robert McIntosh homebred Big Big Plans (All Bets Off), who now sports a record of 4-0-2 for McIntosh’s co-owners Mardon Stables and Dave Boyle.

In race seven, the second OSS Gold division, another heavy favourite was victorious. Sent off at 1-5 Cheesy Smile showed strong closing speed and came home in 26.3 for the win.

Bob McClure was in the race bike, and he felt the soft early fractions of 27.3 and 57.3 set up well for his John Pentland trained filly. With her late speed she was able to clear leader Lyons Bettorday piloted by James MacDonald in the deep stretch.

“She kind of hangs at the bridle at times, so I didn’t want to clear James real quick,” said McClure. “Because he knows that too. If you get by one real quick, she’ll come back a little bit. But John changed the bridle last week and there was none of that today.”

Pentland co-owns the filly with Cindy Molyneux, Peter Charlton, and Archie Leach. The group was all smiles in the winner’s circle after the race.

“This is the group you dream of owning horses with,” said Pentland. “I have had wonderful owners over the years, and a lot of fun. These guys are friends. We all went to Harrisburg together last year to pick these fillies out and you can’t get a better scenario.”

Momentary Control passed Lyons Bettorday late to finish second with a smoking final panel of 26.0. Tyler Jones was in the race bike for his father Dustin. Andrea Lea Racingstables, and Colin McKenna bred and own the Control The Moment filly.

After setting a favourable first half speed Lyons Bettorday (Bettors Delight) closed in 27.1. It’s the third on the board finish for the Anthony Beaton trainee at the Gold level this season. Threelyonsracing owns the filly.

All results from September 2 at Woodbine Mohawk Park