If you’re new to the racetrack experience, explore some of our explainer pages here. Upon arrival, start your night at the Guest Care Counter; purchase a race program and learn the ropes of how to bet on horse races from our award-winning Guest Service crew.

Below you’ll find answer to common questions we hear regarding the sport itself. There are also some helpful visual, please email info@grandriverraceway.com if you have any questions or concerns.

What is the difference between Thoroughbred and Standardbred Racing?

Thoroughbred Racing: Thoroughbred breed of horses which have a galloping gait. Jockeys ride the horses. Distances run from 300 yards to 2.5 miles. Distance is measured in furlongs. Horses leave a stationary Starting Gate at the beginning of the race.

Harness Racing: Standardbred breed of horses which either have a trotting or pacing gait. Drivers ride in a cart called a racebike or sulkybehind the horse. Races are one mile in length. Horses “leave” or start from a moving Starting Gate for a “flying” start, which plays into the strategy of the race.

What type of horses race at Grand River Raceway?

This is exclusively harness racing with Standardbred horses. The Standardbred or Harness Horse is a horse breed best known for its ability in harness racing at a trot or pace. This breed can be traced to 18th century bloodlines in England. The breed is known worldwide. They are solid, well built horses with good dispositions.

Standardbred horses tend to be more muscled and have longer bodies than the Thoroughbred. They are more placid which better suits a professional race that involves driver strategy and high speeds. They are people-oriented horses.

These horses are typically between 800 and 1000 pounds (360 to 450 Kg). They are well defined and muscles are long and heavy which helps with long strides. Their legs are muscular and solid and are generally very tough and durable.

What is the difference between a trotter and a pacer?

The difference is simply how the horse moves its legs. When trotting, the horse’s legs move in diagonal pairs; when the right foreleg moves to the front, so does the left hind leg. The pace is a two-beat lateral gait; pacer’s forelegs move in unison with the hind legs on the same side. All Standardbred horses are able to pace and trot, but their racing gait is determined by their pedigree and training.

Are the jockeys called jockeys and what about their weight?

In harness racing, they are called drivers. Unlike jockeys in Thoroughbred racing, there are no weight restrictions placed on Standardbred drivers. While most of the top drivers in the sport would be considered light, on average 140-160lbs (65-73kg), many successful drivers are heavier. Their job demands strong arms and backs, incredible reflexes and split-second decision-making skills. They must have an exceptional sense of their own horse’s capabilities, plus the likely moves of all of the other horses and drivers in the race. The lines (or reins) they hold in their hands connect to the bit in the horse’s mouth. The reins are the main two-way communication system between a horse and the driver.

What are the carts or buggies called?

The driver sits behind the horse on a sulky or a race bike during the race. The average weight of a sulky is 65lbs or 30 kgs. Most horses will warm-up in a jogger or training cart approximately 90 minutes prior to their race (these are typically much heavier than a sulky, with more room for the driver).

What are the straps on the horse's legs?

This are called hopples (sometimes misspelled hobbles). They are connected loops used to help the horse maintain its gait. The size of the hopples is dictated by the length of a horses stride. Hopples are worn by pacers on all four legs while some trotters will wear half hopples on their front legs only.

What does it mean when people say a horse made a “break”?

When a horse breaks stride, it stops pacing or trotting and starts galloping (or running). This is forbidden in a harness race and drivers must ease their horse back into a pace or trot before continuing to race. Hence the term, my horse made a break or my horse broke. Horses are not immediately disqualified for making a break in stride. If the driver can bring their horse back on stride without causing interference to any other horses in the race, they can go on to win the race, so long as they didn’t make up any ground (an unfair advantage) during the break (the judges make this determination).

What do racehorses eat?

Racehorses are on a scientifically developed diet. The majority of their diet is grass and/or hay and grain combination. A racehorse is given grains similar to an athlete to provide the additional caloric intake required for the extensive training requirements. Also similar to other professional athletes, they receive vitamin and nutritional supplements.

Are these professional horses?

Yes. Standardbred racehorses are professional athletes and have been bred to race since the 18th century. They are a refined breed of performance horse. They have a good disposition and are relatively safe and easy to handle. They are very versatile and transition very well into other equestrian disciplines such as, dressage, jumping, roping/cutting, barrel racing, trail/saddle horse or even just as a great companion animal. The Ontario Standardbred Adoption Society (OSAS) is the place to go when you’re looking for a retired Ontario Standardbred.

What are the socks they sometimes wear on their legs?

What are the uniforms called that Drivers wear? Why all the colours?

Driver/trainer uniforms are referred to as “Colours”. Unlike Thoroughbred Racing, where Jockeys wear the colours of the stable or owners, Standardbred trainers and drivers wear colours that represent their own personal brand. Drivers and Trainers have personal brands and colours. Owners do not have colours in this Harness Racing Sport.

Below you’ll find answer to common questions we hear regarding the sport itself. There are also some helpful visual, please email info@grandriverraceway.com if you have any questions or concerns. 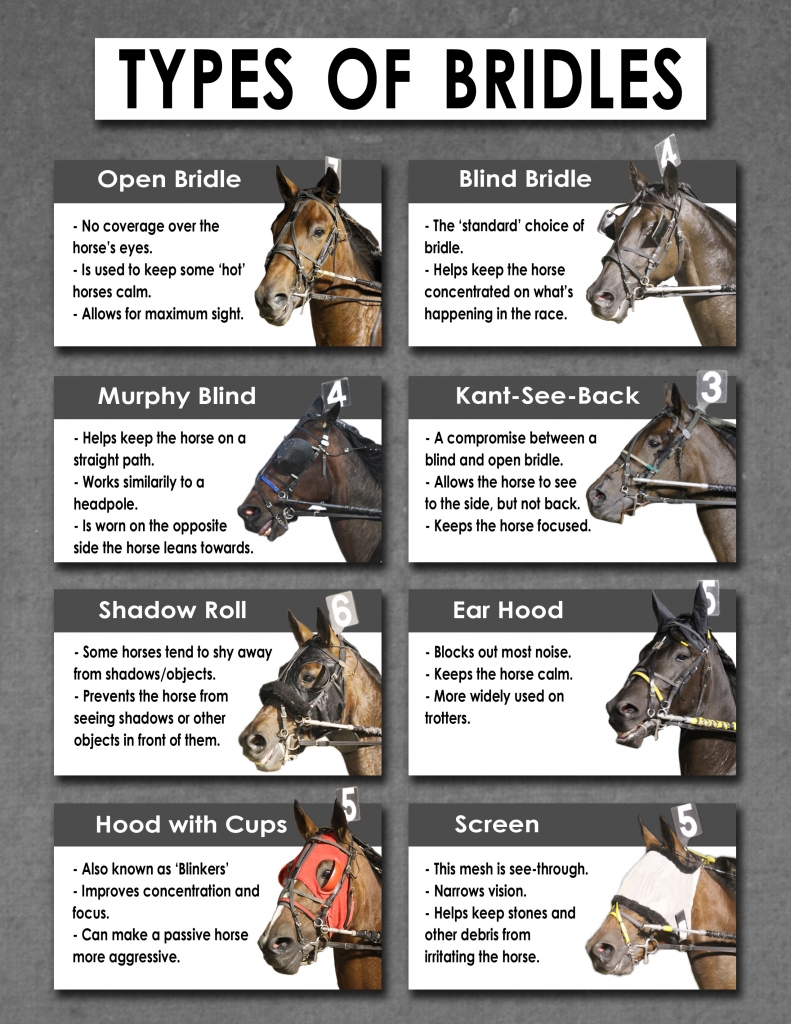 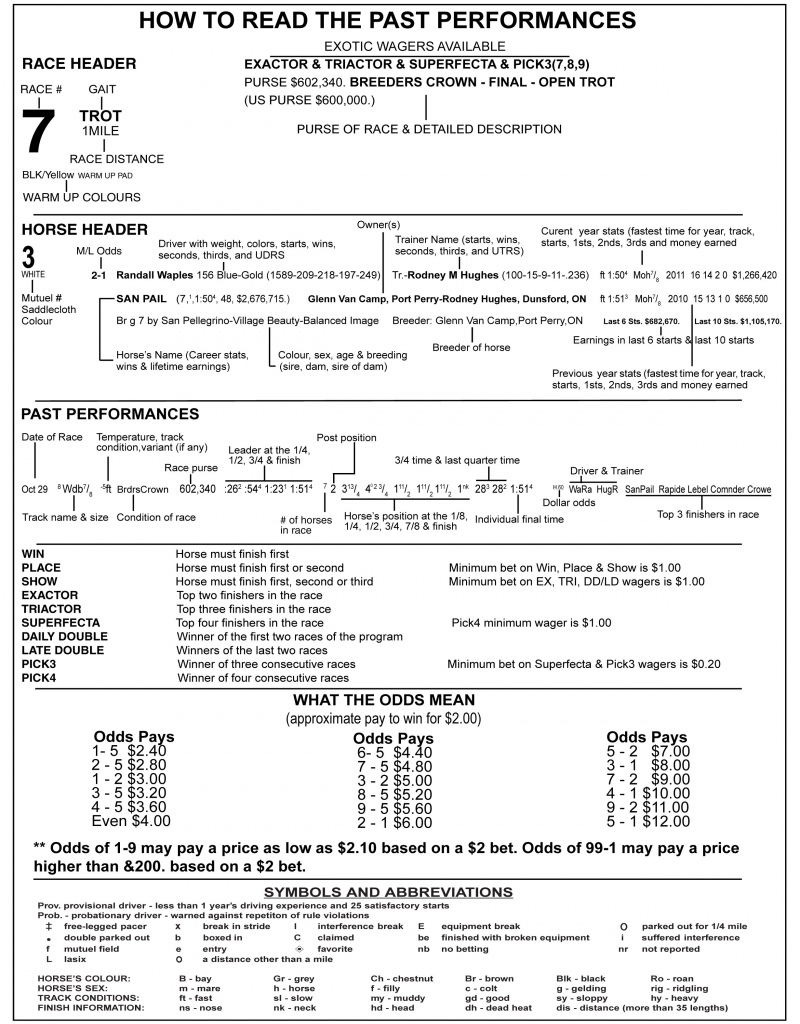 A horse that is racing on the rail and is surrounded by other horses in front, outside and behind it. A horse that is boxed in is held up and unable to gain a clear passage.

To start galloping and lose the natural trotting or pacing rhythm. This occurs more often with trotters than pacers.

Another term for a program of racing. For example, a person may refer to there being twelve races on the card, which simply means twelve races will be staged on that particular day.

A driver which does not train his or her own horses, and is engaged by other trainers to drive their horses.

A race where any of the entrants maybe claimed (purchased) for a specified amount.

The colorful suit (also called “silks”) worn by drivers/trainers. Unlike Thoroughbred racing, the drivers/trainers register their own colors and wear them every time they race.

A male 3 years of age or less.

A race where eligibility is based on age, sex, money won, or races won. For example, “3-year-old colts who are non-winners of $10,000 lifetime or 4 races.”

A horse that races with another horse in front of him is said to race with cover, as the leading horse cuts the wind resistance.

A situation in which the judges cannot separate two or more horses when judging the outcome of a race. This race is declared a tie (Dead Heat).

A horse that is out of touch with the rest of the field at the end of the race. This is often referred to as “finished distanced”.

The first horse to make a move on the leader in a race, moving up on the outside.

A pacer which races without wearing hopples.

The straps which connect the front and rear legs on the same side of a horse. Most pacers wear hopples to help balance their stride and maintain a pacing gait. The length of hopples is adjustable and a trainer registers the length that best suits his or her horse. There are also trotting hopples that work through a pulley system to help trotters maintain their gait.

Judging officials may conduct an inquiry as a result of any incident which may have occurred during a race, to determine whether or not certain drivers and/or horses were responsible for the incident.

Are horses whose legs move in a lateral motion, meaning the two legs on the same side of the body move in unison. For example both right legs move forward as both left legs are going back.

A horse racing on the outside, with at least one horse between it and the inside rail.

When two horses cross the finish too closely to identify a winner, officials call for a photograph of the race, taken exactly at the finish line, to help them determine which nose is ahead.

A horse in a pocket is unable to obtain a clear path because it has other horses situated in front, behind and to the side of it.

Start of the race.

A race in which a horse must contest a mile below an established time standard to prove itself capable of competing in pari-mutuel races.

The breed of horse which competes in harness races.

Also known as the cart or racebike, the sulky is attached to the harness and carries the driver.

An electronic board, usually in the infield of a track, which posts the odds, amount of money bet, results of a race and the wagering pay-offs.

Horses whose legs on the opposite side of the body move at the same time. For example the right front and left rear move forward as the left front and right rear move back.